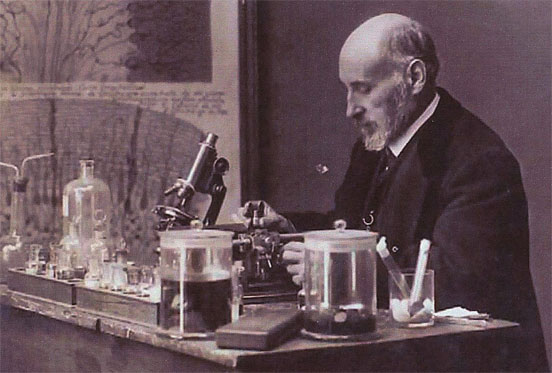 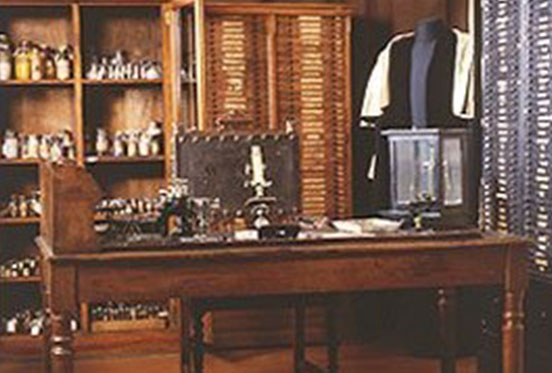 His office with our slides filer

Casa Alvarez Scientific Material, established in 1912 by Mr. Manuel Álvarez Fernández, has a history of over a hundred years. After his passing, his four sons inherited the company, out of which Mr. Vicente and Mr. Manuel became the directors. Mr. Vicente’s retirement opened the way for Mr. Manuel’s sole direction. Nowadays, the company is in the hands of Mr. Alberto, the son of Mr. Manuel Álvarez Robledillo.

After more than a century in the areas of Histology, Pathology and Cytology we make a balance of the evolution of our company throughout this time.

Its beginning was based on the supplying of the well renowned Zeiss Microscopes to the universities. Later, the demand for other products increased, so we added new products to our sales catalogue under our own brand M. Álvarez, such as stoves, slides storage cabinets, manufacturing of glass articles like the blowing of flasks, test tubes, pipettes, etc.

The first firm we agreed to represent under contract was Ernst Leitz Wetzlar GmbH from Germany in 1922, acquired later by the Swiss company Wild Heerbrugg, AG. Representing these two firms widened very importantly the Microscope and Microtome markets in areas such as Hospitals, Universities, Research and Industry.

In 1983 we opened the Barcelona bureau for the Eastern zone.

In 1985 we started to represent the firm Feather Safety Razor Co, through their European representative Pfm Medical, AG., introducing into the market the renowned Microtome Feather Blades, widely used nowadays.

In 1987 we stopped representing the firm Wild-Leitz due to the opening of their own offices in Spain, and we incorporated new representations such as Vogel GmbH, Bright Instruments Co, Oxford Trade, Inoxfune, etc., with whom we have built, together with Feather and Pfm medical, well-stablished and very strong bonds of relationship.

In 2010 the Granada bureau for the Southern region was created.

In 2011 we launched our own brand “Casa Álvarez” for Histopathology and Cytology products.

In 2012 we signed and exclusivity agreement for Spain with the firm Medical Specialties MYR to distribute the MYR brand for Pathologic Anatomy and Cytology.

In 2014 we made a restyling of our brand image, updating our logo, packagings of products, etc.

In 2015 we started to work with Optilia Company dedicated to the manufacture of macro photography cameras.

In 2016 we opened the Valencia bureau. It was in this year also, when under license of the German manufacturer Vogel, we began to realize in Spain the own manufacture of tables of carved, cupboards of formol and all type of auxiliary furniture in stainless steel, being able to realize great projects to measure of the customer needs, gaining competitiveness and shortening delivery times. Since then we have already sold numerous tables and cupboards in Spain, having made and installing large manufacturing projects in some of the most important hospitals in Spain.

In 2017 we continued to grow and opened our second bureau in Andalucia, specifically in Seville.

In 2018 we signed an agreement with the Austrian company West Medica to exclusively market in Spain their scanners for digitalization of preparations and automatic analyzer of cervical cytology images.

It is also in 2018 that we decided to take the big leap and started our International Expansion by establishing our first headquarters outside of Spain, specifically in Mexico City.

In 2019 we included in our portfolio tissue processor, cryostat and slide stainer & glass coverslipper workstation from the Dakewe firm with which we have signed an exclusivity agreement in Spain. In addition, in the same year, we also presented a breakthrough in laboratory automation, the new AS-410M Automatic Preparation Preparation System from the Japanese manufacturer Dainippon Seiki, which we also represent exclusively in Spain.

In 2020 we will have an Integrated Management System, because we are in the process of obtaining ISO 14001 certification

Due to the diverse market situations it has had to face, the company has learned to reinvent itself throughout the years, thanks to the enthusiasm end dedication of both owners and employees.

Though investment in innovation and technology we have been able to offer a wide variety of products and services, meeting the market expectations and fulfilling those from our clients day after day.

Our aim is to give the necessary and appropriate advice to each individual client to satisfy his needs and establish future commercial relations.